0
was successfully added to your cart.

In January 1923, at the suggestion of Mrs. Allen Lacey and Mrs. Leslie Stratton, a small group of young women met to form an organization with a goal of caring for the underprivileged children of Leath Orphanage. Officers were elected and the name, Le Bonheur (Hour of Happiness), suggested by Elizabeth Jordan, (Mrs. Frank Gilliland), was chosen. Sewing for the orphanage was the first and main project. Thus began the legacy of service that the Club has continued over the past century.

A Unique History of “Happiness”

For many years, needy children were given special attention, provided wheelchairs and other medical necessities. It became apparent to the members of Le Bonheur Club that they could help more children by raising funds in the community. The thread of charitable giving became intertwined with the thread of service to children. It has been a strong bond that continues to connect Memphis and the surrounding communities.

Le Bonheur Club became a leader of fundraising during the decades of the 1930’s and 1940’s. From Christmas House Lighting contests, Tennis Tournaments and The Doll House, to Horse Shows and U.S.O. dances, the ladies of Le Bonheur could inspire the giver to be generous for the cause of children. But once again, the ladies felt more could be done. The dream of a children’s hospital was born in 1944.

Never ones to shy away from a challenge, the Club began planning and the fundraising began! It would take the whole community to build a hospital solely dedicated to children. In six short years, in 1952, the doors to Le Bonheur Children’s Hospital were forever opened, never to be closed to a needy child. The Club now had a place to provide direct service to the children and families in need. Elevators were manned, coffee was served, hospital gowns were sewn. Anything to help the children.

Since 1962, with the birth of the Gold Tag Drive, this project has been the signature fundraiser of Le Bonheur Club. Every year, Club members reach out to friends and families to make donations to the Hospital. The donors were given a “gold tag” for their vehicle. Even Elvis Presley was one of our early supporters!

In 2002, the Hospital celebrated its 50th birthday. That year, the Club’s contribution to the Hospital exceeded $900,000. In 2004, the Hospital initiated a capital campaign to fund the building of the new Le Bonheur Children’s Hospital and the Club made a commitment to sponsor and raise two million dollars for the Le Bonheur Clubhouse, a family resource and living center for patients’ families.

In June 2011, Le Bonheur Children’s Hospital celebrated its 58th birthday and opened the doors to a new Le Bonheur, ushering in a new century of providing exceptional care to children in need. Le Bonheur Club was on hand to celebrate, with plans to continue to serve children in need through the ministry of healing.

That same year, 2011, the doors to our Family Resource Center were opened. Funded by Le Bonheur Club, this home away from home, located within the Hospital, is part of our Club’s commitment to the patients and their families. Our focus is to make this a center of compassion and hope by providing families with a setting of respite where they can comfortably seek medical, psychological and spiritual assistance.

Today, the Club continues to support and volunteer within the Hospital by sharing the Hospitality Cart with patients and families, stocking Bunny Lane with toys for each child going to surgery, interacting with patients through Ready Readers, creating No-Sew Blankets to warm the hearts of patients, celebrating our doctors and nurses during Doctors’ Day and Nurses’ Day and finally, celebrating the Hospital’s birthday by serving a family style meal to patients and their families.

Le Bonheur Club is as committed to the patients and families of Le Bonheur Children’s Hospital today as our founders were in 1923.

SEND US A MESSAGE 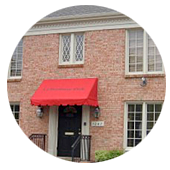